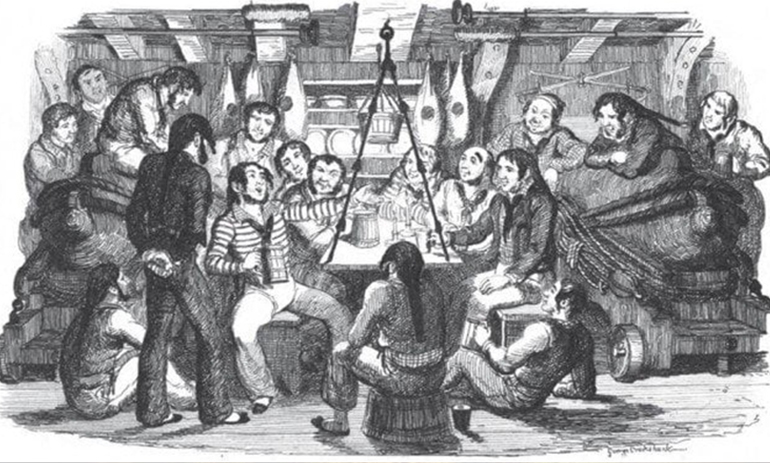 Samuel Morewood an English etymologist suggested an explanation for the origins of the word “Rum” in an 1824 essay he published, he suggested that the word is a British slang for “the best” and its usage in a sentence as “having a rum time”.

However the credibility of this claim is very much questionable as the production of rum in those days involved crude techniques of fermentation and distillation which imparted a very harsh and dry taste to the rum. Morewood later suggested another possibility that: it was taken from the last syllable of the Latin word for sugar, saccharum, an explanation commonly held today, although there is also a theory that it comes from the Turkish name for Greeks, Rum, as some of the earliest rum spirits were distilled by Greek Christians in the eastern Mediterranean islands.

Some people claim the name is from the large drinking glasses used by Dutch seamen known as rummers, from the Dutch word roemer, a drinking glass. There is another idea behind the usage of the word that includes the contractions of the words iterum, Latin for "again, a second time", or arôme, French for aroma. The exact origin of the word can be debated and contemplated upon but the fact remains that rum is probably the most drank spirit with the sea faring demographic.

Rum's association with the navy and the piracy movement began with British privateers trading on the valuable commodity. As some of the privateers became pirates and buccaneers, their fondness for rum remained, the association between the two has been well romanticized by literary works such as Robert Louis Stevenson's Treasure Island.

A legend involving naval rum and Horatio Nelson says that following his victory and death at the Battle of Trafalgar, Nelson's body was preserved in a casket of rum to allow transportation back to England. Upon arrival, however, the cask was opened and found to be empty. The [pickled] body was removed and, upon inspection, it was discovered that the sailors had drilled a hole in the bottom of the cask and drunk all the rum, hence the term "Nelson's blood" being used to describe rum. 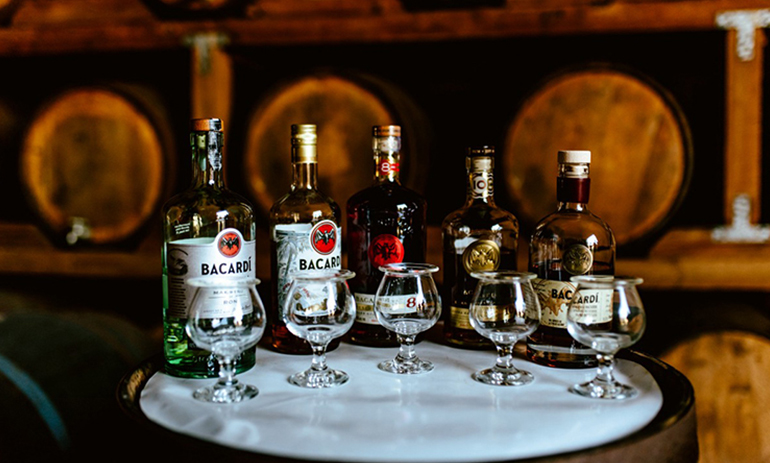 Rum and its Grades

Also known by their particular colour, such as brown, black, or red rums, are classes a grade darker than gold rums. They are usually made from caramelized sugar or molasses. They are generally aged longer, in heavily charred barrels, giving them much stronger flavors than either light or gold rums, and hints of spices can be detected, along with a strong molasses or caramel overtone. They commonly provide substance in rum drinks, as well as colour. In addition, dark rum is the type most commonly used in cooking. Most dark rums come from areas such as Jamaica, Haiti and Martinique.

Fruits such as banana, mango, orange, pineapple, coconut, starfruit or lime are used in the production process. These are generally less than 40% ABV (80 proof). They mostly serve to flavor similarly-themed tropical drinks but are also often drunk neat or with ice. This infusion of flavors occurs after fermentation and distillation. Various chemicals are added to the alcohol to simulate the tastes of food.

These rums are medium-bodied rums that are generally aged. These gain their dark colour from aging in wooden barrels (usually the charred, white oak barrels that are the byproduct of Bourbon whiskey). They have more flavor and are stronger-tasting than light rum, and can be considered midway between light rum and the darker varieties.

They are often referred to as "silver" or "white" rums, in general, have very little flavor aside from a general sweetness. Light rums are sometimes filtered after aging to remove any colour. The Brazilian cachaça is generally this type, but some varieties are more akin to "gold rums". The majority of light rums come from Puerto Rico. Their milder flavors make them popular for use in mixed drinks, as opposed to drinking them straight.

Just like other sipping spirits such as Cognac and Scotch, are in a special market category. These are generally from boutique brands that sell carefully produced and aged rums. They have more character and flavor than their "mixing" counterparts and are generally consumed straight.

They obtain their flavors through the addition of spices and, sometimes, caramel. Most are darker in colour, and based on gold rums. Some are significantly darker, while many cheaper brands are made from inexpensive white rums and darkened with caramel colour. Among the spices added are cinnamon, rosemary, absinthe/aniseed, pepper, cloves, and cardamom.

We hope this article has helped you in understanding the origins of Rum and the beautiful varieties it exists in. It is indeed that time of the year when you sit back and enjoy the various audio-visual treats that describe life and times when rum was the in-thing [re: Pirates of the Caribbean].